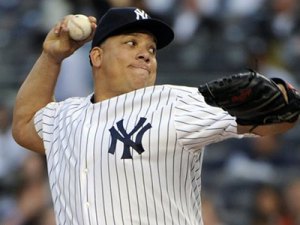 Bartolo Colon is a 37-year-old pitcher for the New York Yankees. Last year, Colon injured ligaments in his throwing elbow and shoulder. The ramifications of such an injury for pitchers in the later years of their careers are potentially devastating. For this reason, Colon’s doctor, Joseph Purita, M.D., offered Colon an injection of stem cells harvested from Colon’s bone marrow and fat cells. Purita wanted to learn whether stem cells could help repair an aging pitcher’s ligament injury and help rejuvenate his career.

Colon’s referring Doctor, Dr. Leonel Liriano said to the Wall Street Journal this week, “When you have a guy like Bartolo Colon who was really really good, was out of baseball, but then has a comeback like he did, you have to at least wonder if this really works.” Daniel Barbarisi wrote in the same article in the WSJ, ‘Now that Colon is proving to be a success story—heading into Friday’s start against Boston, Colon was 4-2 with a 3.86 ERA—Purita says he’s seeing the possibilities everywhere and expects that other pitchers in their mid- to late-30s with nagging arm problems will sign up for the procedure, too.’

While this particular treatment has grabbed recent headlines, it isn’t exactly a novel idea. Grabbing healing cells from one area of the body and injecting them into an injury is exactly what is involved in Platelet-rich Plasma (PRP) therapy. With PRP, healing components of the blood called growth factors, are concentrated from a standard blood draw and re-injected into an injury where those factors typically have difficulty reaching. These injections may catalyze patients’ ability to heal themselves. PRP has been utilized by professional athletes, weekend warriors and injured workers needing an expedited recovery. PRP has been at the forefront of regenerative medicine. While injecting stem cells from patients’ own bodies into degenerated areas may be the next evolution in the treatment paradigm, stem cell possibilities are very much in their infancy. Extensive stem cell studies are already underway and will continue into the future.

Controversial commentary usually follows discussion of stem cell use. Because of the rampant use of HGH (Human Growth Hormone) in Major League Baseball, when baseball players are treated with injections, eyebrows are similarly raised. Thus, when stem cells and baseball players are discussed in the same sentence, critical speculation results. In an article on the NBC Sports website, writer Craig Calcaterra responded to this criticism of this particular treatment of Colon and PRP appropriately: ‘In both cases, however, the therapy itself is noncontroversial. The source of the controversy was the doctor at the center of the particular case: Anthony Galea in PRP and Joseph R. Purita in the case of Colon’s stem cell thing.  Galea remains in legal trouble over his alleged use, purchase and transport of HGH; Purita because he admitted that in his non-athlete patients he uses HGH in the stem cell therapy.’

What Colon’s case represents is a single case study that may lead other aging athletes to sign up for an injection of their own cells. In the meantime, PRP remains a more developed treatment for treating soft-tissue injuries non-surgically.